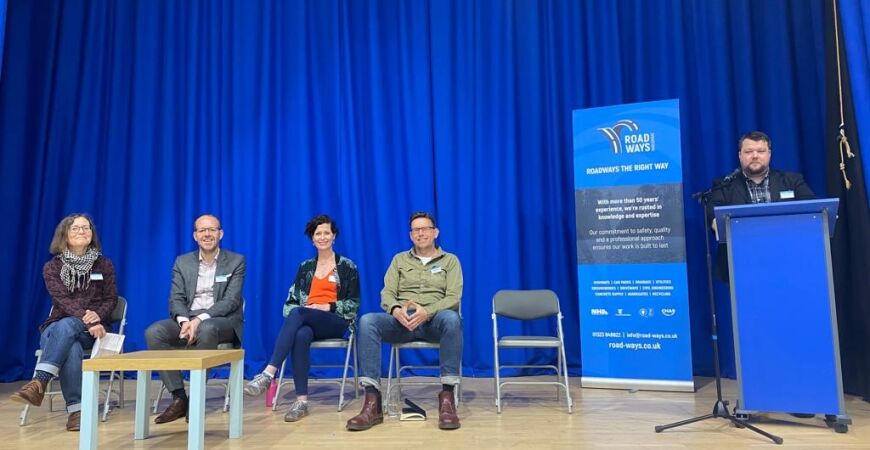 Brighton Chamber's latest Big Debate brought a panel together to discuss Net Zero, how businesses can achieve it - what the barriers and what the solutions could be. Mark O'Halloran from iLaw shares the key takeaways from the panel and breakout discussion.

By Mark O'Halloran of

If there’s a city in the UK which should be leading the way on transitioning to Net Zero, it must surely be Brighton. After all, how much do we pride ourselves on our green credentials, with our Green Party-led Council and the only Green Party MP in the country?

As the Chair, Richard Freeman of always possible made clear, the debate wasn’t about trying to build a consensus, but dissecting and exploring ideas in a safe space where every voice would be heard. Richard’s hope was that each of us who attended would be inspired to do something specific as a result of the debate. 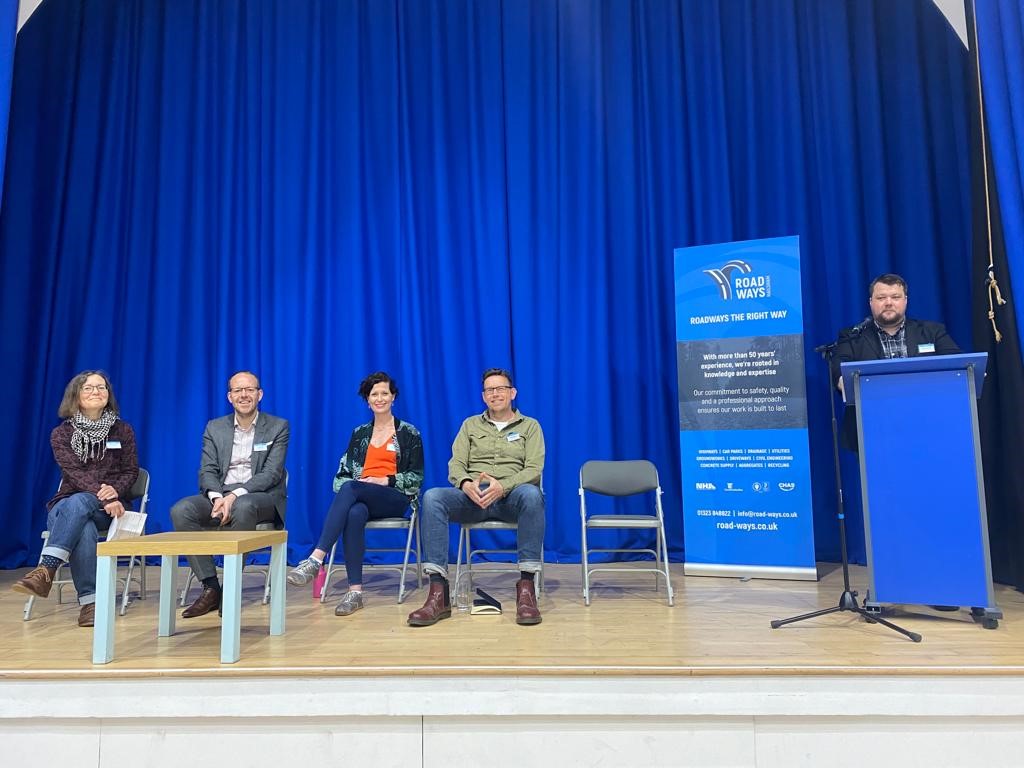 We were very lucky to hear from a panel representing the spectrum of stakeholders. First to be introduced was Kirsten Firth, Sustainability Projects Officer at Brighton & Hove City Council. Kirsten leads on the Council’s Carbon Neutral 2030 plan which she admits is very much a work in progress. One thing she made clear is that the Council itself is responsible for only a small percentage of the city’s greenhouse gas (GHG) emissions, so it would need to work closely with businesses and individuals across the city.

Peter Newell, Professor at University of Sussex, represented academia. He runs the Rapid Transition Alliance whose aim is to spread “evidence-based hope” by sharing examples of impactful change around the world.

Peter explained the need for massive reductions in carbon-demand, not just switching to improved products such as electric vehicles. I doubt I was only attendee shocked to hear that global subsidies for fossil fuels continue to run at US$11,000,000 per minute. Proof enough of Peter’s assertion that the voices of the oil, coal and automotive industries continue to drown out the voices of SMEs and local communities.

The next two panellists, from two very different businesses, gave us some hope for how things could change. Camille Pierson, founder of The Float Spa, told us about her company’s journey towards sustainability which began in 2007. Driven by her customers and the Japanese-inspired philosophy of Kaizen (continuous improvement), Camille and her team identified and rooted out single-use plastics from across the operation, even where that meant initially losing revenue, such as no longer selling water in disposable bottles. The upside however has been a more loyal customer-base who now happily bring their own bottles for shampoo-refills.

One of our most significant employers, Shoreham Port, was represented by its Chief Executive, Tom Willis. With two cement plants on-site and heavy HGV traffic to and from the port, you might think that Tom would ask for time to adapt. Far from it. Tom explained how the Port was run by a Trust, rather than a private company, and very much saw itself as embedded within the local community. It even has people living within its boundaries.

Tom is leading a project to create a hydrogen plant for the Port which will in future power all their heaviest vehicles, with all lighter vehicles switching to electric. Tom also told us about a wider initiative to encourage more goods transport around the UK to be by ship rather than door-to-door HGV, as a single cargo vessel would replace up to 300 trucks for most of the journey.

We soon learnt the significance of the Port’s two cement plants when Victoria Vasiliauskaite from the sponsors, Roadways, told us that cement making alone accounted for 8% of global GHG emissions. On a more positive note, she also told us about Roadways’ new approach to road building, which takes a leaf out of the Ancient Romans’ book and uses volcanic ash as a component to reduce CO2 emissions by 40%-70%. 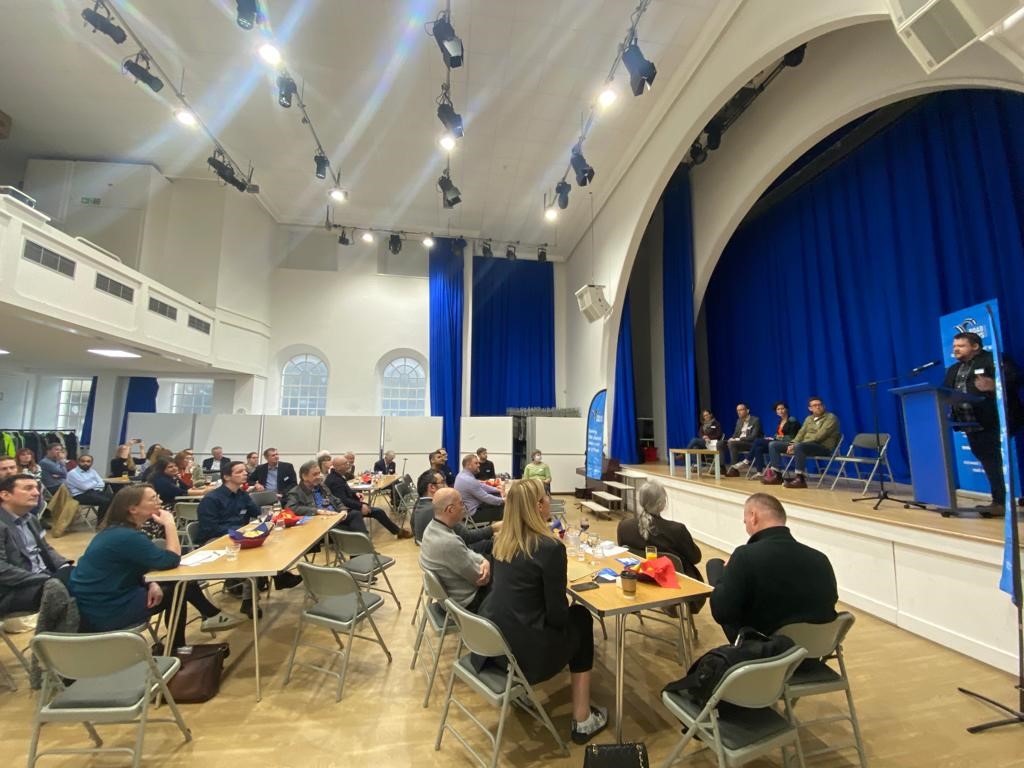 The floor debate was as lively and challenging as we had hoped for. It was certainly robust on my table though our facilitator, Jake Standing from Kreston Reeves, did a great job helping us keep it all good humoured. It wouldn’t be fair to attribute comments to individual attendees and I’m not qualified to rank the significance of different suggestions, so what follows is just a sample of ideas that caught my personal attention:

There were many more. Closing thoughts were delivered by Steve Creed, Co-Founder at Circular Brighton and Hove, who described how at least 45% of the reductions we need in GHG emissions will have to come from how we make things and how we use land. In a challenge to the usual capitalist orthodoxy, Steve said that only by truly collaborating with each other can businesses build a circular economy for everyone’s benefit.

In a final call to action, Sarah Springford, our Chamber of Commerce CEO, announced that everyone would be invited to become one of the Chamber’s Net Zero Champions.

For my part, I’ve been proud to be a Net Zero Champion for some months now. So I told myself I really had to put my effort where my mouth was and make one significant change in response to participating in the Big Debate. After discussing it at home, we agreed it was time to sell the car and not replace it.

Mark O'Halloran is a Consultant at iLaw. Catch up on previous Big Debates run by Brighton Chamber here:

> Is a four-day week good for Brighton business?> What's next for Brighton? Let's exploit the glamour of our city.

And for this and more topical events, head over to the Chamber events page:

> Take me to Chamber events