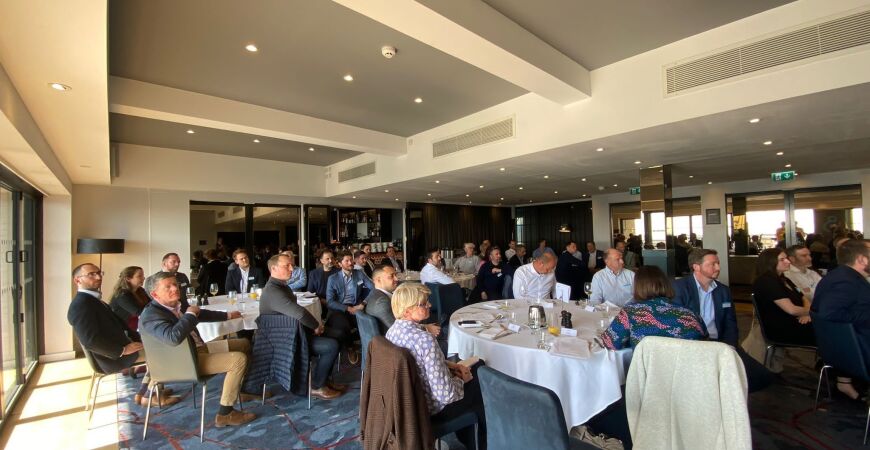 Who even wants to own a home anyway?

Who even wants to own a home anyway? Not the new generation, it seems… and build to rent is the trend to watch.

We were blessed with another gloriously sunny day for our Construction Voice lunch at Malmaison. The room was once again packed with the who’s who of property and construction in the city. Even Brighton & Hove City Council high flyers Liz Hobden, Head of Planning , as well as Max Woodford, Assistant Director, City Development and Regeneration, were in attendance.

Sponsor of the event, Sean Clemons, Managing Director at newly acquired MGAC | RLF, reminded us that the event was celebrating eight years this year and still embodied the original objectives – to bring together developers, construction firms and the local authority.

Our chair, Ed Allison-Wright, Brighton & Hove Economic Partnership, introduced our speaker: Dan Batterton, Head of Build to Rent (BTR) at Legal & General Investment Management. Dan had spent the last seven years building L&G’s BTR portfolio with a £2.5bn investment and another £2.5bn had been committed for the next five years.

The concept of us all being homeowners is relatively new. Dan reminded us that 100 years ago, 90% of UK residents were renting. Aiming for homeownership is also not necessarily the case for the future generation who want to live in a specific place and live a specific city-centre lifestyle which doesn’t necessarily include saving for a deposit on a house.

After the 2007/8 financial crash, L&G looked again at the residential market in order to find ways to get a return on their pension investments. After analysing the market, they only found two buildings they wanted to own, that were attractive and big enough and built to high environmental and fire safety standards. Given the lack of available stock, L&G quickly decided to build their own and now have nine schemes that have been built and 11 under construction.

The UK rental market, unlike other countries, is full of one-year leases. This is so that banks and mortgage providers can reclaim the property quickly if needed. With L&G owning their own buildings, they didn’t need to go down the same route, and so were able to take a longer-term view and offer five-year leases to its tenants.

In 40 years, carbon regulation is likely to be in place for all housing stock – new and old. L&G therefore made the decision to try to ensure its buildings are zero carbon now, to save them having to retrofit them later down the line. L&G has made the commitment to be net zero by 2030.

However, with the Hove Gardens project, Dan discovered zero carbon was going to be impossible, at least for now. One example he gave was that it would take more carbon to create triple glazed windows than the offset you’d get from installing them in a high-rise building.

L&G also offers capped rent increases of inflation or at 5% if inflation is more than 5%. They have essentially self-regulated themselves.

Dan explained the benefits of a B2R building from a tenant’s perspective – the added extras as part of the rent includes wifi, reduced energy bills because of the energy efficient way the building has been developed, car clubs, and community and co-working spaces for residents to meet – L&G has seen five home births at their properties – all of which were as a result of couples that met at their buildings!

The UK BTR sector provides 15,000 homes per year which is 5% of what we need as a nation. However, 45,000 homes a year are leaving the rental sector so it’s shrinking overall. The good news is there’s a big market for more pension funds to join the party and Dan predicts this trend will increase in the UK with new players coming into the market.

At Section 106 stage, L&G works out how much rent it can forego forever on the development for affordable apartments. However, the decision as to whether that money is used to offer a bigger discount on fewer apartments, or offer a smaller discount on more apartments, is down to the local authority.

Some quick stats about the demand for L&Gs BTR apartments:

Ultimately, even if everyone in the country really did want to own a home (which they don’t necessarily anymore), they’d have to save on average for 15 years to be able to get a deposit together, and in that time they will have to rent…so the market is huge and growing.

Ed conducted a quick poll as to whether we all thought it was a necessity or a choice that people were renting. Most of us thought it was necessity. Dan proved us all wrong. He surveyed his residents and 66% of them wouldn’t buy a house even if they had the deposit ready - it’s therefore an active choice for the new generation.

For Brighton, this is an important factor in our city’s future. We have a lot to offer the B2R generation with our seaside living, the downs on our doorstep, city culture and big businesses offering quality jobs for the best talent.

So, what can help this sector grow? One of Dan’s pleas for the Government is to provide a clear path through the planning process and better funding for the planning resource to help push through planning applications more quickly.

After a delicious lunch, Liz Hobden spoke to us about BTR in Brighton and Hove. There are four schemes in the city with consent including the Moda Living development on Sackville Road and the L&G and Watkin Jones development at Hove Gardens.

The positives, as Liz saw it, were that the schemes can be delivered quickly, they are of a high quality with strong sustainability credentials and are delivered as long-term investments. They also offer facilities such as gyms and meeting rooms, although Liz would like to see more opportunities for the local communities to be able to access these, as well as the BTR residents.

The big challenge, on the flip side, is the affordability of the apartments which are often out of reach for local residents. In Brighton, 30% of our housing stock is rented, which is higher than the national, and southeast, averages. Liz would like to see a higher proportion of affordable apartments in the BTR sector to help provide homes for the 9,000 people on the waiting list in the city. The council’s target is for 40% of developments to be affordable – with BTR it tends to be 10% - and sometimes even lower.

In answer to Dan’s plea for better planning resource, Brighton is in a good position – Liz explained that the city’s planning resource is fully staffed and there’s a new project manager starting soon to help unlock some sites in the city. Liz is also recruiting for assistant planners after BHCC agreed to invest in the planning service.

So, Build to Rent is growing, and Brighton is well positioned to capitalise on this trend…if we can get the thorny issue affordability sorted.

See you next time!

Thanks to Flo Powell, Joint Managing Director of Midnight Communications. Find out more about Midnight on their website.

> Take me back to blogs