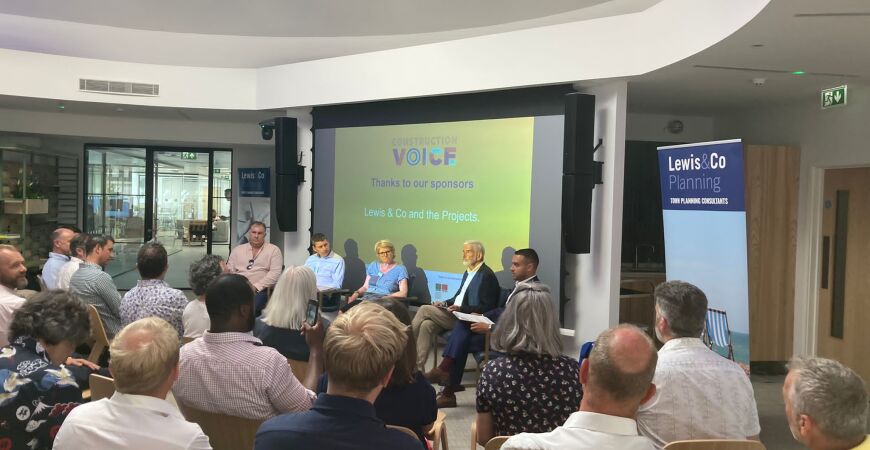 Construction Voice: does Brighton have any hope of meeting its raised housing targets?

Brighton Chamber’s Construction Voice event attendees were treated to a sneak peek at the brand-new Projects space – so new, in fact, we were the first event to be held in the shiny building on Nile Street. Given the demand for Grade A office space in the city, it’s perhaps unsurprising that it’s being opened with 100% occupancy of its serviced offices.

The event was well attended as always, by a mix of familiar and new faces representing the ‘who’s who’ of the county’s property and construction industry. Thanks went to sponsors Lewis & Co Planning, also one of the original founders of the event alongside Haydon Consulting, MGAC | RLF and Graves Jenkins.

The theme of the event was to assess the impact of Article 4 Directions and the 35% housing uplift requirements in Brighton and Hove.

To try to get more housing built in the UK, recent planning reform made it easier for developers to turn old buildings (often offices) into residential buildings without going through the usual planning permission requirements. Article 4 directions give local authorities the power to push back on this and protect certain buildings and in Brighton, much of the city centre’s office space has been protected under Article 4.

The other important factor to note is that Brighton’s housing needs were recently raised due to a fall back on government set needs with a 35% uplift, along with many other cities around the country, taking our target from 660 a year to 2,300. Given that our city has only once met the 660 target in the last decade, to say this raised a few eyebrows would be an understatement.

Will kicked off proceedings by setting the scene that since the pandemic, the world has fractured. Working from home is not the norm in other countries like it has become in the UK. According to Will, there is no evidence to say that working from home is a good idea and until there’s evidence, we’re living in a weird paradigm of assumption that the 3:2 working week works – and given that we’re not asking the same of schools, we’re not teaching the future generation that this is the norm and the trend could well be reversed.

Liz explained that in December 2020, the UK Government had 44,000 responses to its planning reform White Paper and many conservative districts were concerned about the number of homes they’d need to provide.

The Government therefore came up with a way to deliver its target of 300,000 new homes a year and by increasing the housing targets of 20 cities by 35% - which included Brighton & Hove – to reduce the pressure on smaller towns.

In the last four years, BHCC has permitted more than 1200 homes a year but these take a while to get through planning and, once consented, to actually get built. So whilst there are developments happening, we’ll never achieve this lofty target without a more realistic plan.

In 2018, BHCC introduced Article 4 to protect office space in the city centre, to try to make sure we have a balanced and sustainable city with a strong economy. In 2013, Brighton lost a lot of affordable office space to permitted development – although this wasn’t Grade A by any means, this space could’ve supported more of the city’s SMEs.

In August 2021, Class E buildings (often retail and leisure units) were granted permitted development rights to convert straight to residential use without planning permission, although there is a size limit of up to 1500sqm. Brighton is a highly constrained city so there’s a lot of pressure for non-residential space to be converted to homes.

When asked ‘does the national housing target still exist’? Kelvin said it does but it could all change depending on who gets the PM job. Liz Truss has said she wants to abolish top-down Whitehall inspired targets, reduce red tape and introduce tax cuts. Michael Gove has said the Government will take steps to ensure the planning directive doesn’t impose housing targets on local communities that can’t be met.

According to Peter, the manifesto housing targets were ‘back of a fag packet’ figures and, given that most cities vote Labour and most towns are Conservative, the 35% uplift reflected the political reality that for Tory politicians it is easier to build in urban rather than rural areas. Unfortunately, for some cities the targets are utterly unachievable. In Sheffield, for example, the Government’s own projections for population growth would have to increase significantly by 40% just to have enough people to house if the 35% increased housing target was met. The Tories are convinced that densifying cities is the way to go and as long as they are in charge, this situation is unlikely to change.

What we may well be faced with, especially in a Rishi Sunak run country, while Liz Truss, who has a more supply-side approach might be more likely to look to build on green belt land.

Will described his work with Tower Hamlets which, in the beginning, didn’t see Canary Wharf as a good thing until the local authority realised they could get more from business rates than they ever could from council tax from residents.

With the projection that 50% of the world’s population will live in urban centres by 2050, it’s going to be all about placemaking – creating places for future generations to live, work and enjoy.

According to Will, Brighton is often an immediate ‘pin in the map’ for corporates looking for bases outside London but we simply don’t have the square footage of Grade A space available so many of them choose Birmingham or Cambridge instead.

In Brighton, the pressure for affordable housing is huge with 9,000 people on the waiting list. For hospitality consultant and local resident Bridget Baker, having 3,000 Airbnbs listed in the city was something she felt should be looked at with restrictions put in place, especially as many are apparently only let once a week. Liz explained that several council CEOs from around the country, including BHCC’s Geoff Raw, had written to the Government about this and a proposal is open regarding a registration system so local authorities can monitor the quality and number of short holiday lets.

On the subject of affordable housing, Kelvin commented that the Government seems to think it can ‘build itself out’ of the situation but we’ll never be able to build enough housing to make house prices fall. Instead, other interventions need to be made such as restricting buy-to-let mortgages.

Bringing the discussion to a close, Ed asked the panel for a short response to the question ‘do you believe Brighton and Hove’s housing target can be delivered?’:

Liz introduced Martyn Holmes who’d been recruited by BHCC to help unblock housing development to release around 1500 residential units and said he’d be in touch with the Construction Voice attendees to discuss possible solutions…watch this space.

Flo Powell is Joint MD at Midnight Communications. Find out more about Midnight on their website here.

> Construction Voice> Back to blogs