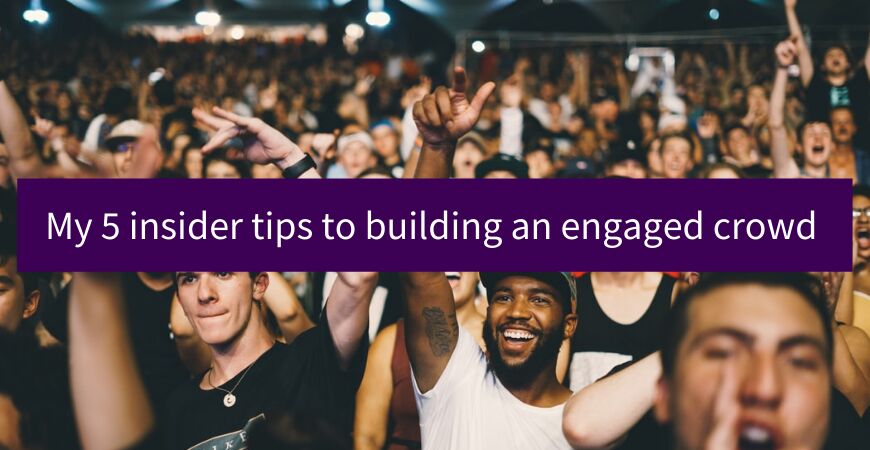 My 5 insider tips to building an engaged crowd

Jes Bailey of Crowdfund 360 writes after her Bite-sized Learning session for Brighton Chamber, with 5 insider tips to building an engaged crowd.

By Jes Bailey of Crowdfund 360

Building a crowd is one thing but building a loyal following of people who will actually buy from you is another. Gone are the days of people buying bots and fake followers. An authentic, engaged community is what most businesses crave these days.

Given that I have built these communities for crowdfunding campaigns of 70+ clients, and seeing that the way we do that is aligned with building a general customer base, I thought I’d share my top 5 insider tips to build an engaged crowd.

The more niche you can be, the easier it will be hone in on your actual audience. Being a brand of beer is one thing, but being a brand of vegan beer, targeted at women who love the outdoors is definitely an easier market to get more engagement from. Yes, going niche will not make your crowd as BIG but the engagement rate you get from your crowd will be much higher. If you’re just starting out, I’d say get as niche as you can and as time goes by and your success rises you can branch out more.

2. Get your first followers involved

You need to create a group of first followers. 4 or 5 friends, family, cheerleaders, these will be the first to publicly do what you ask of your crowd, to encourage them it’s a safe space for them to follow on the trend. It’s just like being in school when no one wanted to be the first one to answer the teacher’s question - but once a few people had, it became less daunting for the rest of us.

Not everyone is going to buy your product/service. Just as you want to be niche to attract the right crowd, you also need to know your target market inside out. You want to spend a fair amount of time creating a persona, or a few, and knowing them inside out. Their job, their relationship status, their hobbies, their values, their spending habits. Knowing all this means you’re more likely to create messaging they’ll respond to, post it in the places they are looking, at the times they’re checking.

If your target persona is a dog owner and you’re selling collars and leads, think about collaborating with other independent brands that sell to the same audience but that aren’t competitors.

Dog owners who are buying leads and collars, also probably need dog treats, they also probably need poo bags (never thought I’d write that in a blog post!). They’ll also probably need dog shampoo, a brush, dog toys etc. Now if those businesses have been around a bit longer than yours, they will already have crowds built up of people very similar to your own target market. They’ll already have newsletter lists, social media followings and so on. By partnering, collaborating, and working with these other brands, you’re adding value to both audiences and expanding your crowd. I once had a client whose crowd jumped from 6,000 to 70,000 through 5 collaborations.

5. Refine everything based on the data

Whilst everything I have said above works, it only works well if you test it, analyse the data and then refine what you’re doing. If your niche turns out to be too narrow, or too wide, it will need altering. If you see a pattern that if three of your ‘first followers’ comment, it encourages interaction, but if only one comments it doesn’t, then you know you will need a minimum of three first follower comments each time you post - so you might need to widen your first follower crowd a bit. If you guess your target market but the data shows no improvement, something needs changing and refining and more tests need to be done till you get it spot on.

Perfectionists be warned, building a crowd is all about educated guesses and experimenting at the experimenting. Over time it becomes easier, but it is always a work in progress.