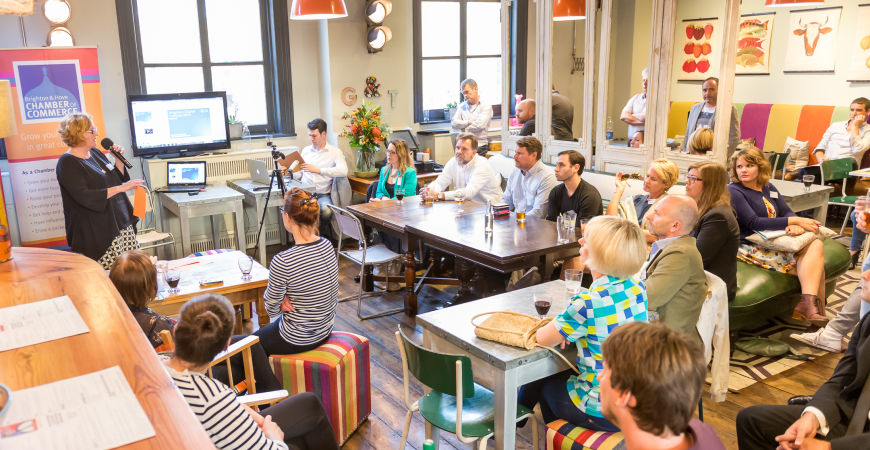 The pop-up panel - Digital is dead

Once indistinguishable from magic, technology is now all around us. By its very nature, it signifies a time of constant evolution and, Jenni said, this can be uncomfortable, as we don’t know what will happen next.

She used the analogy of VUCA – Volatile, Uncertain, Complex and Ambiguous – which has now been adopted by businesses who must figure out how to operate, and flourish, under these conditions. “Technology is the under-pinning factor of this change…VUCA has become the new normal.”

Technology has become such an important factor of our everyday lives – both in a personal and business context – that it can no longer be seen as something separate. This is why Jenni claimed that digital is dead, not because it doesn’t exist but because it exists in everything and it is up to us to ensure we make the most of the opportunities technology offers us. She drew attention to the once multimillion pound companies who hadn’t figured that out in time, and subsequently failed.

Jenni said, “We’re all walking round with the world’s information in our pockets. That’s a miracle. We all have a responsibility…vision will address volatility and turn insight into decisions.”

Inside the beautiful Cyclist Refreshment Room, curiously hidden in Brighton station, technology was all around us. As well as the panellists – Mike Herd from the Sussex Innovation Centre, Pete Jenkins from e-Advantage Solutions and Adam Lee from No Pork Pies – who are each experts in the field of new technology, there were various games with which to experiment.

The games included augmented reality, with Captain America posing for a 3D selfie. The virtual reality headset, brought by Ben Kelly at SoMotion, was “emotional”, for Abby at least as she orbited the earth – the user could choose a a trip into space or a rollercoaster ride. Another popular game used intuitive technology to control what happened on-screen using your hands instead of a mouse.

Gamificiation is a great way to engage staff, as well as customers, told Pete Jenkins, the first panellist to take the floor. This is becoming increasingly evident, as more and more kids are growing up playing games on a regular basis. In contrast, school becomes much more boring and businesses that don’t adapt to these changes in psychology, prompted by use of new technology, could risk becoming unappealing to the new generations of workers.

“Games provide instant gratification,” Pete said, “and can be used to motivate and develop staff, as well as encourage customer loyalty.” Through gamification you can track progress and monitor goal, encourage team work and healthy competition.

Adam Lee spoke about eye tracking technology, which tracks where users are looking in order to identify whether a web design is working effectively. At No Pork Pies, they use the technology to create heat maps and gain a far more accurate and detailed understanding of a user’s journey and experience in order to create better conversion rates.

New technology needs those using it to make sense of it and really make the most of it for their specific area, Mike Herd said. At the Sussex Innovation Centre, they provide the specialists to put around the technology in order to develop its capabilities even further.

Mike gave the example of an EPS that can sense an electric field and will change the way we measure ECG, as it requires no direct contact with the skin. At the Sussex Innovation Centre they experiment with different ways this new technology could be made into a useful product - it could predict when people are about to fall asleep while driving, and give them a jolt to stop them falling asleep at the wheel.

“Digital’s dead" rang true. It’s becoming boring. It’s what people are now doing with technology that is more exciting,” Richard Green from the sponsor, 15below told me.

The event concluded with questions to the panel. A listener on Google Hangouts, where Ben Kelly was broadcasting the event, asked Adam, “Does something need to be visual for people to engage with it?”

Adam said eye tracking shows what people are attracted to, whether that is copy or visuals, and the objective of the site will dictate the specific processes.

An audience member asked Pete, “Is there a danger you could demotivate people by using gamification techniques?”
Pete replied that although there can only be one person at the top, there are ways of mitigating so that you only see and are competing against your friends, which is a method used by Facebook. Alternatively, placing people in teams compacts the benefits of collaboration without the risk of demotivation.

New technology in business provokes more questions than answers – looking for answers and experimenting with new technology will ultimately be what helps to define successful businesses, not just of the future, but of the present.