Construction Voice: Viability and the barriers to progress

Are there barriers to building in Brighton?
Development has become a divisive topic in Brighton and Hove, seen by some as the economic salvation of the city, by others as, at best, a necessary evil, tackling the shortage of housing and commercial space that’s widely recognised as one of the biggest challenges currently facing us.
Those involved in development say, however, that barriers are being put in the way of development and unless they’re tackled, the city will fall behind on targets for new homes and offices, pushing rents and property prices even higher as demand continues to outstrip supply.
Phil Graves, Managing Director at Graves Jenkins, an independent property consultancy and Construction Voice event partners, spoke prior to the event noting that:
"The debate on viability for property development is not a new topic as the various issues have always been carefully considered prior to the commencement of any scheme. However, with more stringent planning policies now in place alongside rising build costs, yet pressures on local authorities to produce more housing and employment space, the equation has become more difficult."
The panel
Over one hundred of those involved in the property, construction, development and historic preservation sectors came together recently to discuss the issue of ensuring the financial and practical viability of development by removing barriers, at a Construction Voice event hosted at the County Cricket Ground by The Brighton and Hove Chamber of Commerce.
The event brought together a panel of four people representing organisations are at the heart of the debate. Kicking off was Nick Hibberd, Executive Director of Economy, Environment and Culture for Brighton and Hove City Council. Nick started by pointing out that to be considered viable, a development needs to provide a competitive return for both the developer and the landowner and that that need was already enshrined in planning policy.
He then listed some of the barriers to progress and development and asked whether councils and the public expect too much from developments, such as both private and affordable housing, commercial space and a mixed use approach. He defined this as ‘optimism bias’, ie being too optimistic about what can be included and achieved when making decisions about development.
The next speaker was Olaide Oboh, Head of Marketing and Communications at developers First Base, who are involved in a number of projects in the city, not least of which is the redevelopment of the Anston House site next to Preston Park.
Olaide said that discussions about developments should be about far more than just the financial viability of a project and that factors such as the concerns of residents, potential improvements to the local environment and how a scheme fits into the neighbourhood must be taken into account too:
“As a developer who genuinely focuses on people, we have erased the word viability from our vocabulary. This is because we know that’s there is so much more to development than viability – we focus on the benefits that regeneration can bring – new jobs, impact on spend locally, increase aspiration, reduction in crime and improved wellbeing.” 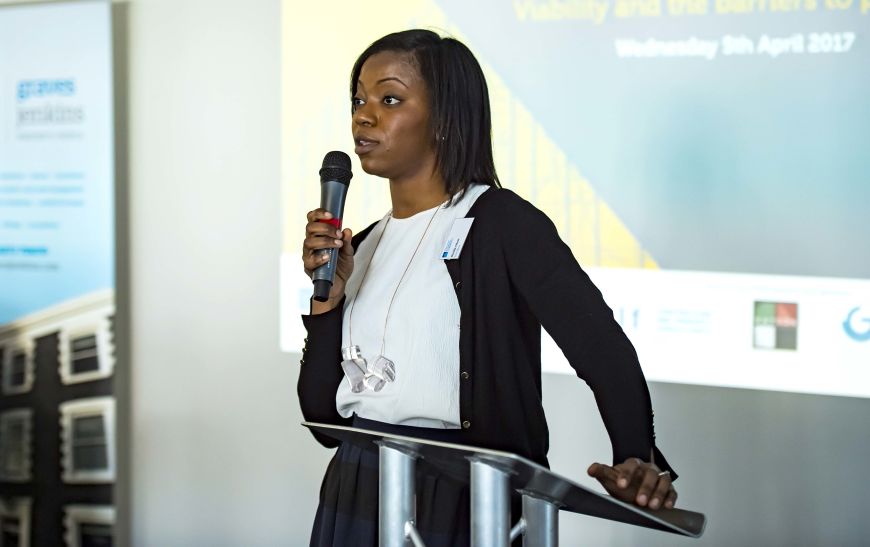 Olaide Oboh speaking during the panel debate
She went on to argue that local authorities don’t seem to see these wider benefits as being as important as viability, possibly blinkering their decision-making.
The third speaker to address the event was New Business Director for construction firm Willmott Partnership Homes, Steve Skuse.
Steve explained how many builders and construction firms are still struggling to recover from the problems caused by the last recession, with prices driven down and a shortage of manpower and other resources. He also touched on the problems endemic to the construction industry such as 20-50% of the workforce coming from overseas with attendant language barriers and training deficiencies in the workforce leading to quality issues. He said:
“Viability means different things to different people and whilst we all remain in silos we will never be able to see the whole picture. A piecemeal approach risks division and misunderstanding, so true engagement with all stakeholders from the outset, is an absolute in my view. We face political and economic uncertainty at the moment but a lack of delivery capacity in the supply chain is already with us, so early engagement is even more vital. 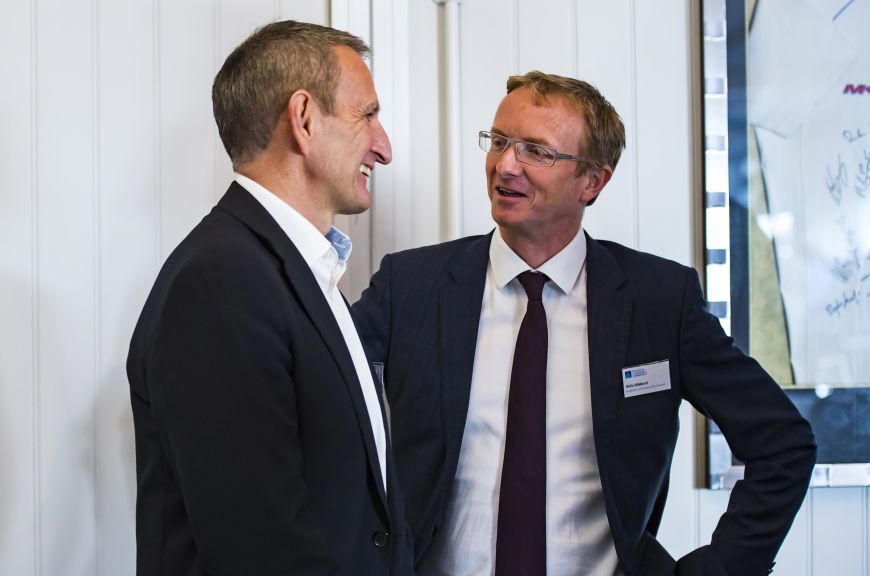 Steve Skuse and Nick Hibberd
The final speaker of the evening was Andy Winter, Chief Executive of Brighton Housing Trust, who opened his speech by pointing out that every council since 1983 has had plans to deal with derelict sites (such as Black Rock) and the housing crisis, but none has been able to have much impact (although he acknowledged that some limited progress has been achieved in recent years with the building of some council housing).
Andy claimed that the term ‘affordable housing’ has become useless, as even those being sold under that banner are not affordable to most people in the city and that the risks of Brighton and Hove becoming a dormitory city for people working in London are becoming ever-greater. He went on to suggest that thinking needs to be bolder to address the housing shortage and that the council should consider building on National Park land to the east of Brighton. 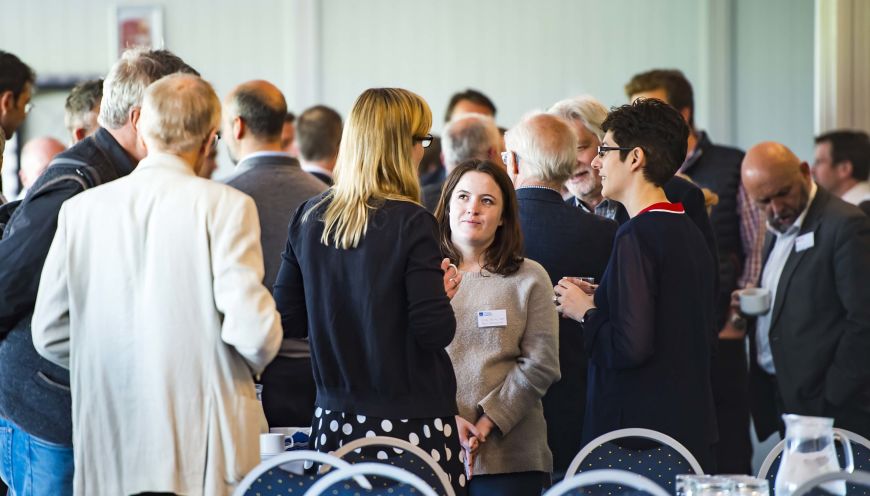 Networking at the event
Andy told the room:
“Unless we massively increase the supply of affordable homes, unless we have greater imagination and perhaps new partnerships, we will not meet the housing needs of local people, and Brighton and Hove could slip into becoming a dormitory town with the creative minds looking elsewhere to flourish and grow. How long will it be before Hastings takes over from Brighton?”.
Speaking after the event Ed Allison-Wright, Executive Director of event partners Haydon Consulting, said:
“The issue of viability has been a constant factor, particularly in the evolution of brownfield sites in Brighton & Hove. Part of this challenge is the lack of communication between the developer, the local authority and the wider community and one of Construction Voice’s focus is to give a platform for this debate to happen and for us to collectively learn how best to move Brighton & Hove towards the goals it aspires to meet”
Construction Voice founder and sponsor Sean Clemons of property company Robinson Low Francis said that the event really demonstrated the importance of bringing together all the different parties involved in development in the city:
“Construction Voice is all about getting in depth discussion across a spectrum of stakeholders in the built environment, including the public and private sector, local authority and community groups. It was good to hear the council acknowledge that for development to happen they need to compromise as much as the developer. In my opinion underlying everything is the capacity of the construction industry to deliver, particularly with the current labour shortages which will only worsen with Brexit. Unless we can encourage new blood into the industry and modernise our approach, construction prices will continue to rise and viability diminish.”
Thank you to Steven Bustin who chaired this debate.
Thank you to Helmut Lusser from Hove Civic Society for summary notes from the discussion.
The photos were taken by Vervate, award winning professional photographers who specialise in commercial and PR photography.
The Construction Voice events are created and run by Brighton Chamber, with our event partners Haydon Consulting,  Graves Jenkins and Robinson Low Francis.
Phil Graves, Managing Director at Graves Jenkins, an independent property consultancy and Construction Voice event partners, spoke prior to the event noting that:
"The debate on viability for property development is not a new topic as the various issues have always been carefully considered prior to the commencement of any scheme. However, with more stringent planning policies now in place alongside rising build costs, yet pressures on local authorities to produce more housing and employment space, the equation has become more difficult."