Is a ‘Greater Brighton’ better for your business?

Is a ‘Greater Brighton’ better for your business?
You might have heard of the term, but do you know what it means geographically? And is it good news for your company or not? 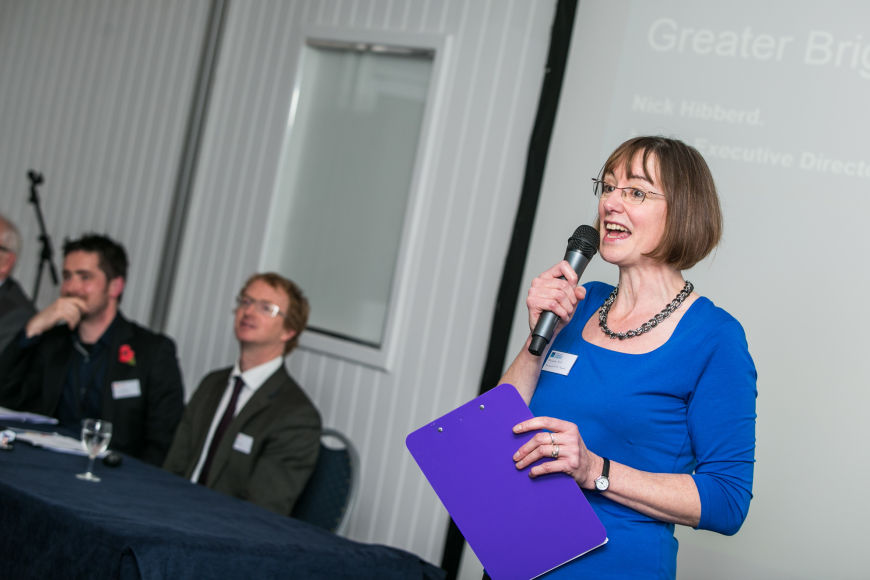 A few tentative hands went up when I asked this of the 100-strong audience at the latest Construction Voice debate, held at the Sussex County Cricket Ground.
And yet, as Nick Hibberd, one of the panel speakers made clear, Greater Brighton already exists.  “When you look at how our city works on a day to day basis – how people travel to work, to learn each day, how the housing market operates – all the things that show how we run our economy, they all reflect a region beyond the city’s boundaries.”
The regular ebb and flow of human bodies prove this.
Every day 33,000 people commute out of Brighton, to London and other parts of Sussex.
And 28,000 people commute in, from the surrounding towns like Lewes, Worthing, Shoreham and Burgess Hill.
Then there are longer term migrations: people re-locating from London in search of the sea; others leaving Brighton in search of cheaper homes in neighbouring coastal towns.
As Acting Executive Director of Environment, Development and Housing at Brighton and Hove City Council, Nick is aware of how important it is to give this bigger region – spanning the Lewes, Worthing, Adur and Mid Sussex local authority areas – a united voice. 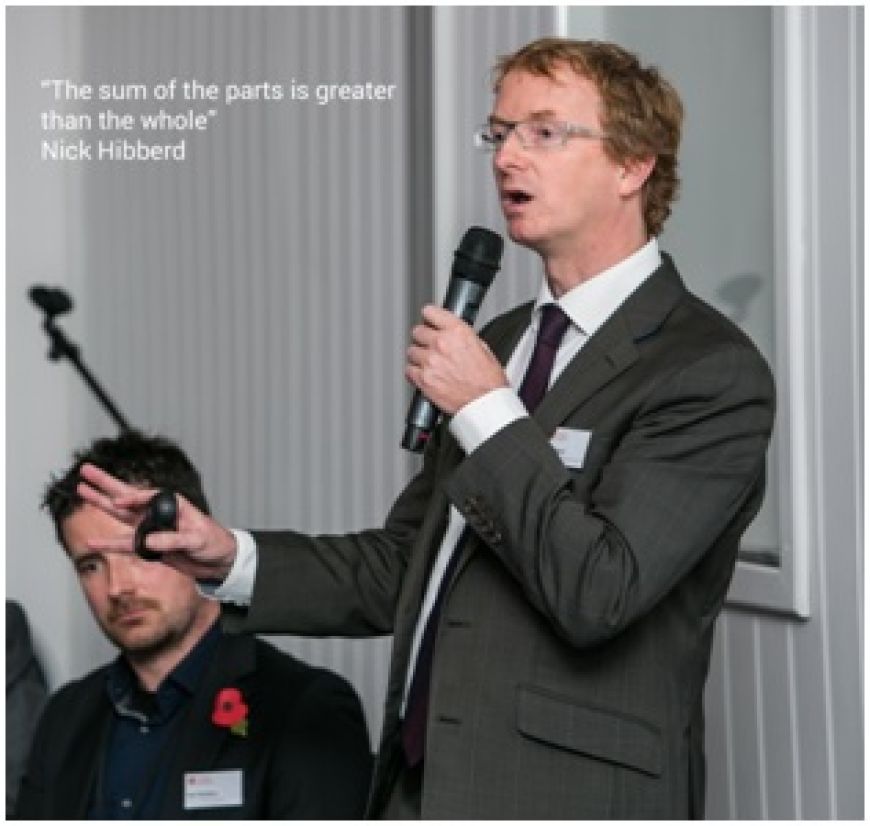 Enter the Greater Brighton Economic Board, which brings together political and business leaders from the wider region.
A stronger voice on a bigger stage.
It’s been going for 18 months, and in funding terms alone, Nick feels it’s a success: “It depends slightly on how you count it, but it’s secured about £100 million worth of fund-ing over the last 18 months for various projects.  They include: unlocking key growth sites; significant projects with businesses and universities, including the development of new innovation and research centres; and funding for business support programmes, to help businesses to grow.  The collaboration across Brighton means the sum of the parts
is greater than the whole.”
Andrew Swayne, Senior Manager at Ricardo, Chair of Adur and Worthing Business Partnership and a member of the Greater Brighton Economic Board, was also on the panel.  He explained how this united voice has helped to leverage national and/or European funding for a number of crucial schemes – including raising the tidal walls along the River Adur from the A27 towards the sea. “Without the flood defence money, you don’t get investor confidence and that area is a future employment site.” 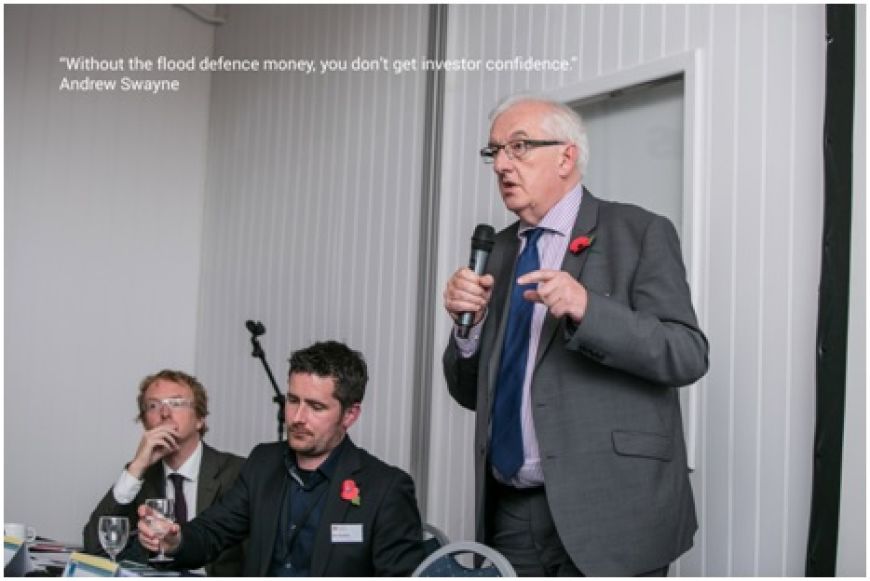 Benefit from the Brighton ‘brand’.
Of course, when you bring together a group of towns – each with its own history and identity – there’s always a fear that Big Brother Brighton might take over.   As Head of Regeneration and Investment at Lewes District Council, Max Woodford is acutely aware of this.   He was the third panel speaker and he made it clear that the Lewes district, which includes Newhaven, does not feel like that:
“We recognise that Brighton has a strong brand.  Yes, Lewes has a strong brand, but Brighton is much stronger on a global scale.  So it’s really a case of riding on that and working with partners to maximise the economic benefits for the area.
“What we think we bring to this, is the space to grow and space to balance the economy.  Brighton and Hove’s economy is overheating a bit – with a lack of office space and a lack of growth sites. We have a lot of those already, particularly in Newhaven, where we have an Enterprise Zone application in.’ 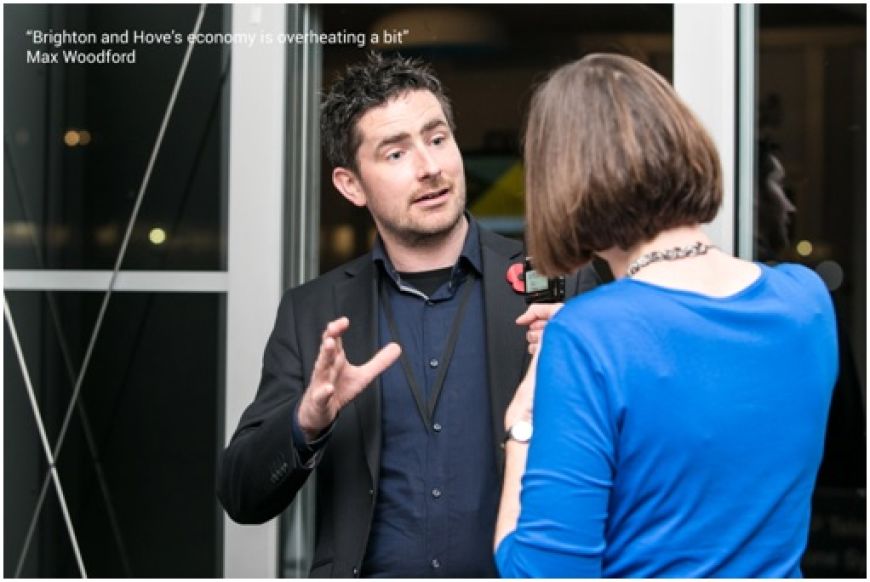 The mention of ‘space’ or lack of it, prompted a number of observations, including one from Ed Allison-Wright of Haydon Consulting – one of the event partners.  (The others – Graves Jenkins and Robinson Low Francis, work closely with the Brighton and Hove Chamber of Commerce team , to organise regular Construction Voice events across the year.)
Divisive or united voice? 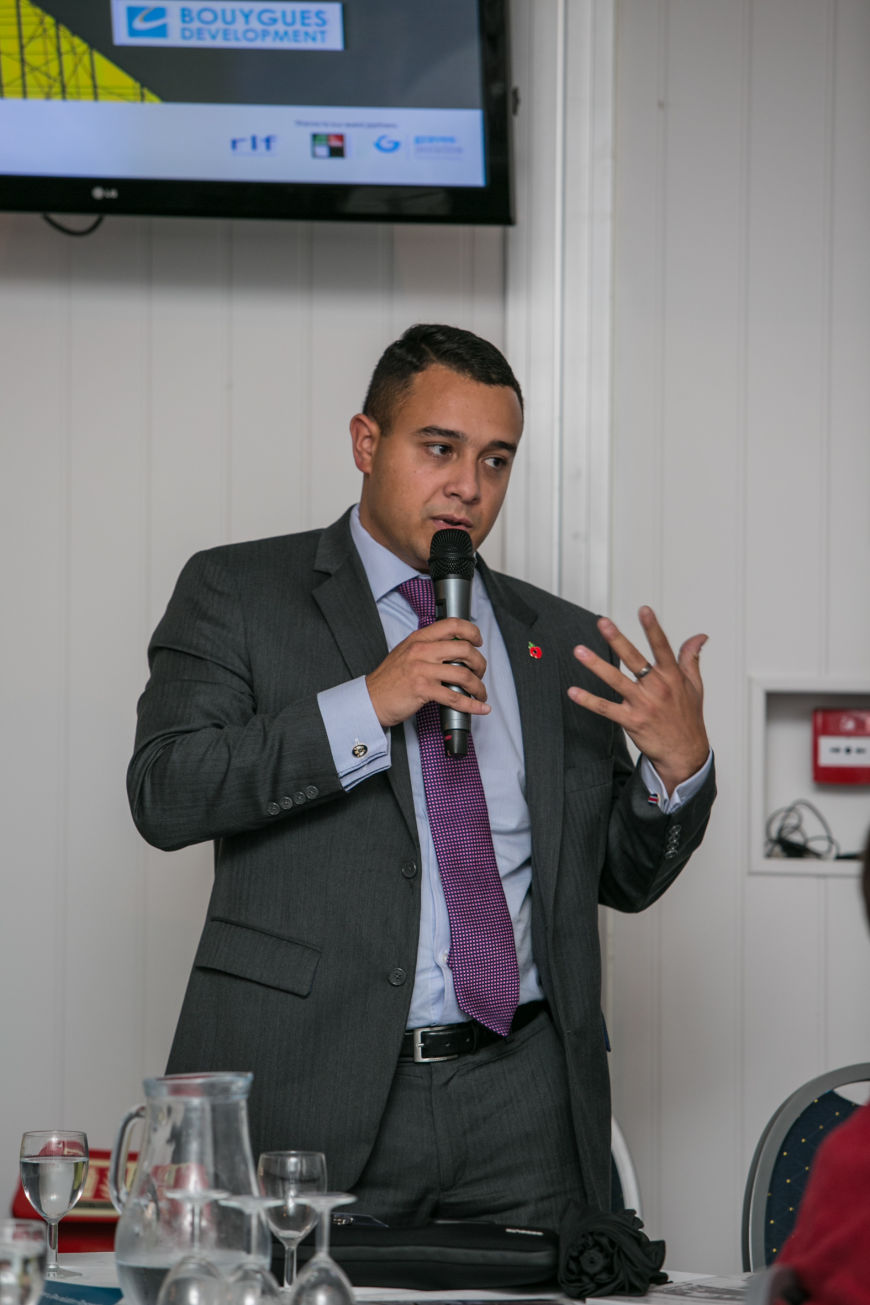 As Ed Allison-Wright pointed out, Brighton’s growth is affecting neighbouring districts – and views inevitably differ as to how to solve the long-term housing problem. Take the Mayfield Market Town proposal, where 10,000 houses might be built on an area of land between Sayers Common and Henfield. A development like this would help to ease Brighton’s growing pains, but many people in the Mid Sussex district (and beyond) broadly reject the Mayfield idea. To what extent does the presence of the new Greater Brighton Economic Board help to solve issues like this? Particularly when their members have such different perspectives?
Devil in the detail?
Another audience question homed in on transport and the nitty gritty of what Greater Brighton means when you’re (attempting to) travel across it.
Dr Samer Bagaeen leads Brighton University’s Planning School.  “Ever heard of SUMP?” he asked. No hands were raised this time, tentative or otherwise. 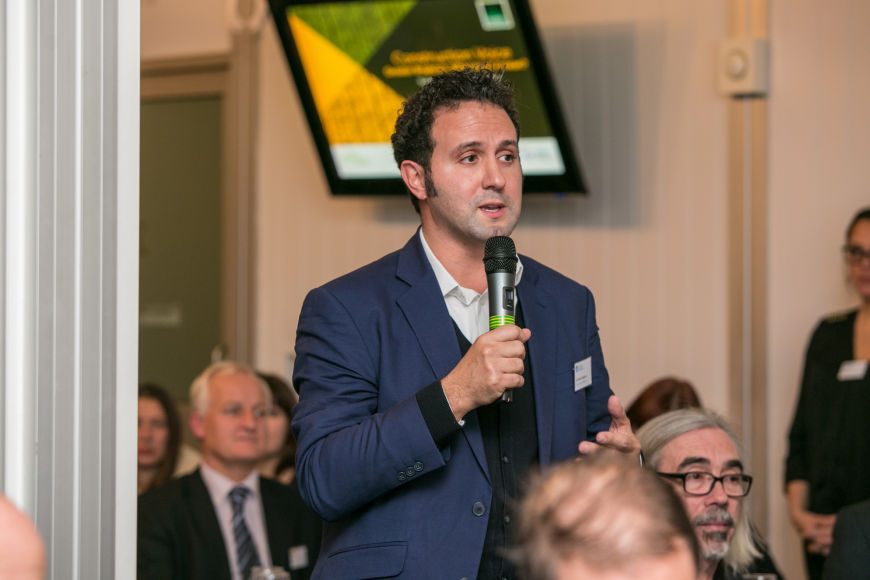 If you ever wish you could have a single travel ticket which covers every sort of bus AND train, then a ‘Sustainable Urban Mobility Plan’ will interest you.  A SUMP means that different transport companies integrate their IT on a shared platform,  so passengers no longer have to queue at different ticket offices.  They can travel around with an Oyster-type contactless card.  Samer:
“There is no point in saying we will create integrated transport if it’s impossible for someone to get on a train, go find out where the car club share vehicle is or be able to hire a bicycle without knowing where it is.
Yet the infrastructure is all there.  Transport companies have the same underlying tech-nology.  That is the sort of thing the Greater Brighton board could do which would make an immediate difference to people…”
Keep it on the agenda.
The panel acknowledged that the region as a whole faces very tricky housing and trans-port issues. (‘The A27 is a construction project in its own right!’ Andrew Swayne declared at one point.)  And the creation of the Board isn’t a magic wand – but, as Nick Hibberd pointed out, having a framework to talk regularly is invaluable: “Regular meet-ings allow us to have some of the difficult conversations we need to have to tackle those big economic challenges.”
And yes, the different districts of this Greater Brighton do have differing views – but these fade away in the face of economic need. Andrew Swayne: “Because there is a bal-ance of private and public sector business and politicians around the table, there is genuine consensus.  So the consensus has not changed because of, for instance, the switch from Greens to Labour in Brighton.  This success is because it’s about a functional, economic area – not because of political boundaries.”
Raise your hands.
By the end of the discussion there was a consensus. To close the proceedings,  I repeated my question about the meaning of ‘Greater Brighton’ – and many hands popped up.  Even more 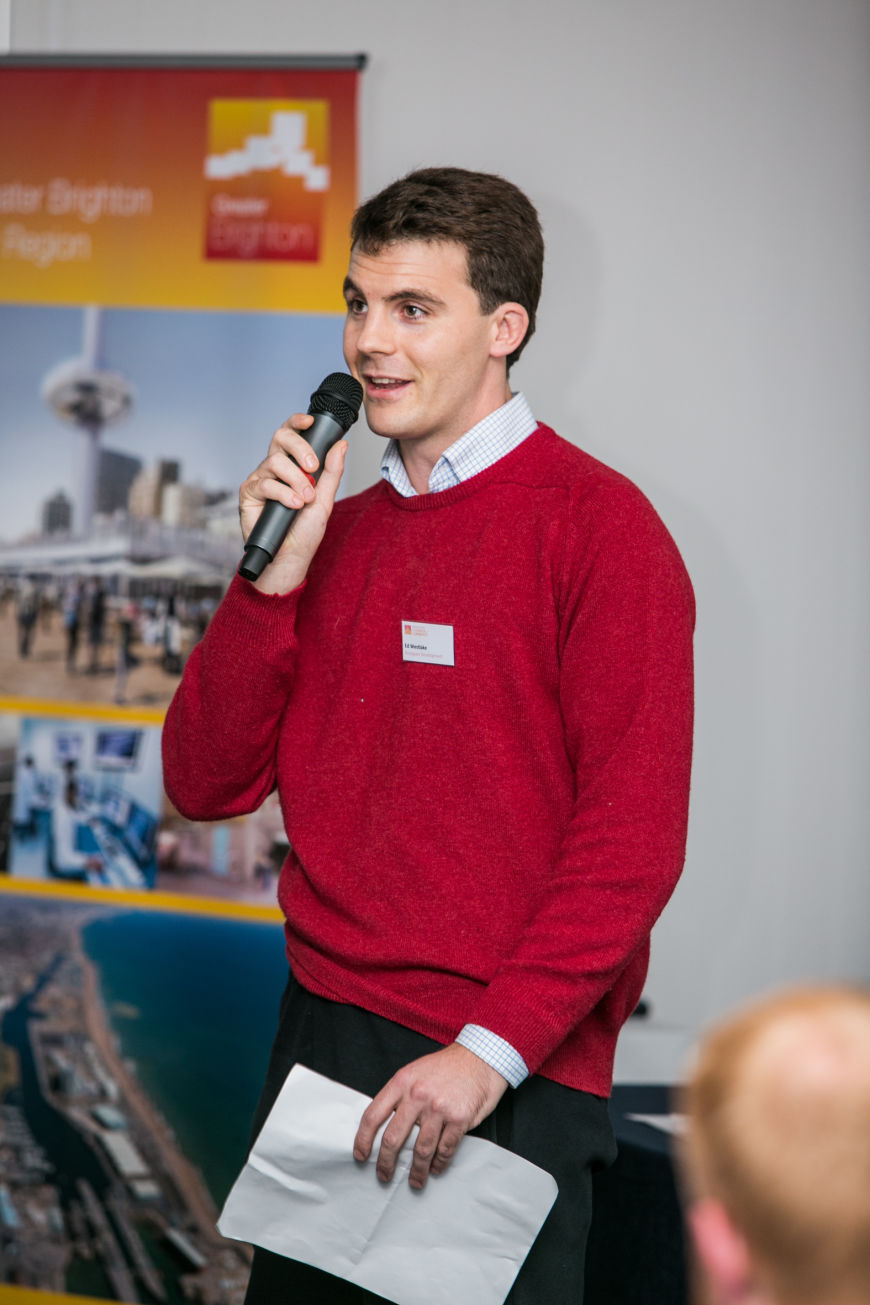 were raised when I asked whether the assembled business leaders – architects, builders, developers, surveyors – felt the new region was good news for their businesses.

Ed Westlake, Development Manager at Bouygues Development , the evening’s sponsor, summed up the positive mood:
“We’re a big company that operates all over the UK, so for us, Greater Brighton is a real opportunity.  To date our focus has been on Brighton and Hove but we are keen to build relationships into the surrounding areas, across the Southern Coast.” 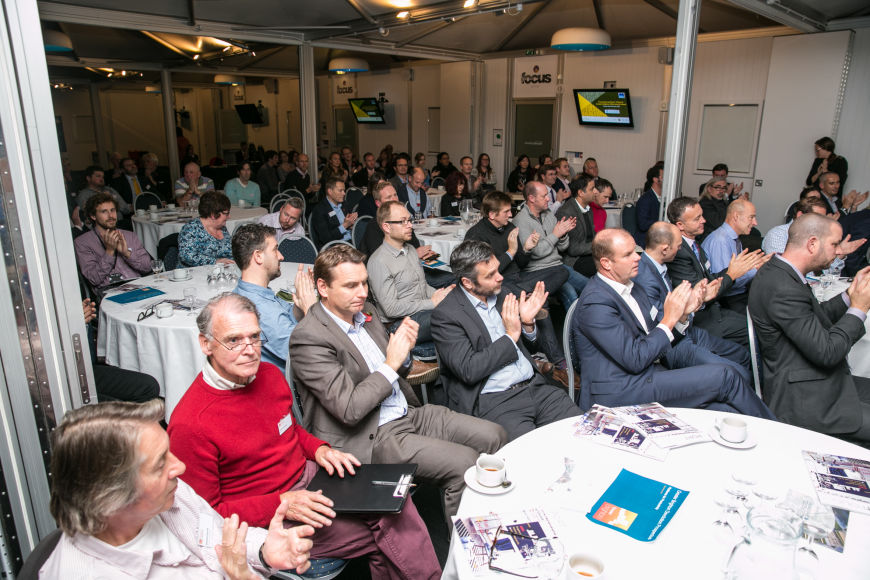 Get in touch here if you want advance notice of the next Construction Voice discussion.  Have your say on issues affecting your sector - and a chance to network with other businesses in the construction industry.
This post was written by the Chair of the debate, Miranda Birch. Miranda uses her BBC interviewing background to find the stories behind different companies and turn them into web content that will inspire their target audiences.
The best moments of Construction Voice were captured by Vervate, award-winning photojournalists who  specialise in providing visual content and media buzz (press and social), with and for, commercial businesses.
The Construction Voice quarterly events are run by Brighton Chamber with event partners Graves Jenkins, Robinson Low Francis and Haydon Consulting. They bring together impressive panels of speakers and all the key players from the city’s construction sector.  It’s a chance to update yourself on the latest trends and test new thinking around issues such as affordable housing, retail and tourism, and office space.